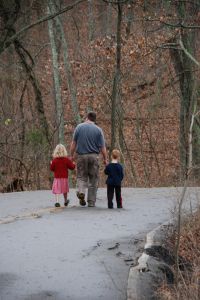 Advantages and Disadvantages of Joint Custody
“I don’t care who I live with. I love you both. Please don’t make me choose--just tell me."
The above quote from a nine-year old boy of divorcing parents exemplifies the trauma and stress children can experience by feeling torn between two parents. Divorce is very stressful, especially for children of divorcing parents. It is important that parents seeking a divorce make it a goal to protect their children from as much stress from the divorce as possible. It is also important that both parents maintain a positive presence in their children’s lives.
Because neither parent wants to feel disposable when it comes to custody issues, and because children of divorce don’t want to feel abandoned by either parent, joint custody is one alternative. With joint custody, divorcing parents can stay more actively involved in their children’s lives.
Joint custody is an agreement between divorcing parents who live apart to share jointly in the best interests of their children by establishing two homes for their children and consulting with one another about all important decisions affecting their children. It is imperative that parents maintain an amicable and communicative relationship for effective shared custody.
There are advantages and disadvantages to joint custody, however. An advantage is that shared custody provides needed stability for the children and fosters a closer relationship with both parents than they would normally have in traditional custody. Joint custody arrangements may help avoid legal custody battles that are stressful on children. In addition, shared custody can spare children the potential trauma they feel when one parent moves out of the home.
A disadvantage is that some children in joint custody arrangements may feel as though they are never really settled in one place, especially if there aren’t consistent schedules planned ahead of time and maintained effectively and in a positive manner. It can be chaotic for children if consistent schedules and amicable communication is not maintained.  In addition, it can be more expensive to maintain two households than it is to maintain one primary household.
Learn more detailed information about the differences between physical joint custody and legal joint custody and effective strategies for establishing and maintaining a healthy, positive joint custody arrangement by reading my web article, “Joint Custody: Pros and Cons of Co-Parenting”﻿

Picture credit:
Horton Group
Posted by Melissa at 11:02 AM No comments:

“When the sun rises, it rises for everyone.”
This anonymous quote serves as a reminder that all people, including children, are created equal and should be treated with equality.
Statistics on the number of children reported missing annually by the Center for Missing and Exploited Children are alarming. Many of the children reported missing are black children. Approximately 800,000 children in the U.S. are reported missing each year. From that total, approximately 42% of the children reported missing are African American.
There is a perception among some that there is racial inequality in the mainstream media coverage of missing children. Social media has attempted to bring to light the inequality in the coverage of missing white children and missing black children. Despite social media highlighting the inequality, there is still a perception that mainstream media coverage has not changed or done much to address the disparity in coverage of missing children.
One would hope that race is not a factor in the disparity in coverage. Regardless of the reason for the disparity in mainstream media coverage of missing white children and missing black children, the disparity needs to be brought to public attention and addressed.
You can learn more information about this controversial subject by reading my Suite 101 web article “Black Missing Children”.

Picture credit: Anissa Thompson
Posted by Melissa at 10:26 AM No comments: