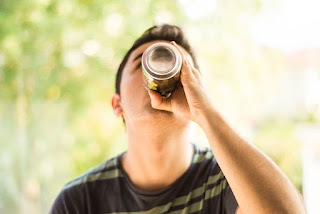 New research shows that increasing numbers of children consume energy drinks, but experts say they are unsafe for kids.

According to Brenda Goodman’s article, “Report Finds Energy Drinks Risky for Kids”, a report on new research published online in Pediatrics brings to light an increase in the number of health problems related to the use of caffeine by children. It suggests that parents need to take caution regarding their children consuming energy drinks.

Energy Drinks and Sports Drinks
According to Dr. Jay Aldersburg’s article, “Sports and Energy Drinks for Kids”, there are two types of drinks that are being used by children. In his article he points out that the American Academy of Pediatricians, reports that many parents and children mistakenly think that sports drinks and energy drinks are the same.
Sports drinks include products such as Gatorade, Powerade, and others. They contain electrolytes and water and carbohydrates that serve to replenish the body during vigorous sports activities. Sports drinks can be used by children and adolescents, but doctors caution that they should only be used for those children who are involved in sustained or prolonged vigorous activity.
Energy drinks are drinks such as Red Bull, Jolt, and others. Dr. Aldersburg reports in his article that Tara Harwood of the Cleveland Clinic cautioned, “A lot of children active in sports are using energy drinks, but energy drinks contain caffeine which they don't need and sugar and other ingredients that aren't healthy for a developing child,"

Safety of Energy Drinks for Children

Jennifer LaRue Huget references in her article, “Study Warns Against Energy Drinks for Kids”, a study reported in the journal, Pediatrics, explaining the risks involved with consuming energy drinks, especially for children. The study reviews evidence that the serious harmful effects, such as heart failure are rare, but difficult to document. Until very recently there has been no poison-control code to specifically identify life threatening events related to energy drinks. Such a code has now been established, however.
Huget’s article points out that caffeine in moderation can be beneficial, as it enhances cognition, attention span and physical stamina. It remains undocumented, however, as to what degree such benefits extend to children and adolescents
Huget’s article also points out that the FDA limits the amount of caffeine in a soda to 71 mg per 12-ounce serving. The danger with energy drinks, because they are classified as dietary supplements, is that they have so far evaded such restrictions. The ingredients, some of which include taurine and guarana, added to achieve the benefits of improved cognition, attention and endurance, are part of what makes the risks of consuming energy drinks difficult to document. There is little research on their effects.
Linsey Tanner’s article, “Doctors Warn Against Energy Drinks for Kids” quotes a statement from Dr. Steven Lipshultz, pediatrics chairman at the University of Miami's medical school, on the subject of energy drinks."We would discourage the routine use by children and teens.”
Dr. Tanner also states that energy drinks contain ingredients that can increase the jittery effects of caffeine, and can also cause nausea, diarrhea, and other symptoms ranging from unpleasant to potentially dangerous. He claims that energy drinks should be regulated as strictly as alcohol, tobacco, and prescription medications.

Huget’s Washington Post article explains that the journal Pediactrics calls for stricter guidelines regarding energy drinks. The journal suggests increased awareness from doctors of the possible increase in their patients’ use of energy drinks and the potential adverse health effects associated with them. This is particularly true of patients who are athletes and children with ADHD, diabetes, or eating disorders.

The journal also recommends additional study of caffeine's effects on young people and of the effects of other energy-drink ingredients. The journal suggests strict regulation of energy drinks if research provides convincing evidence that energy drinks are harmful.
According to the article, “Power Drinks – Should Your Child Drink Them?”, everyone needs to stay hydrated to maintain good health. Giving children plain water for hydration is always a safe choice, even for those children who play rigorous sports. They don’t necessarily need something extra to avoid dehydration.
The average child or adolescent who plays sports should get all the necessary nutrition and hydration by eating healthy foods and drinking a lot of water before, during, and after playing sports or exercising.
During games and sporting events, drinks, such as water and vitamin water, rather than soda and energy drinks, should be available at all times. The amount of water needed can vary from one child to another. Water breaks should be consistently scheduled every 15 or 20 minutes, depending upon the age, weight, the rigorousness of the activity, and the weather conditions.
In conclusion, the key is to stay hydrated, but with water and healthy drinks, rather than potentially dangerous ones such as energy drinks.